Karwa Chauth is the most awaited festival for Hindu women who are married. This festival is mostly is celebrated in northern parts of India. Usually, this festival falls any day between October and November. This festival is celebrated on the days of Krishna Paksh which is a dark fortnight according to the Hindu calendar month of Kartik. This festival is celebrated after 4 days of Purnima or full moon in the month of Kartik. This traditional festival is celebrated by Punjabi women with great pomp and show, and now many more states of women have also started celebrating this festival. On this, every married woman does fasting from the sunrise till the moon rise and pray from god for his husband’s long life, and mothers-in-law play an important role of this day. A beautiful and colorful ritual is associated with the festival that is sargi.  Sargi is that which is prepared by mother-in-law for her daughter-in-law in the morning and which daughter-in-law has to eat in the early morning. In sargi you will find pheni or meethi seviyan, fruits, coconut, meethi mathri, dry fruits, mathri, paratha, sweets, tea/juice, and some gifts. This sargi is given to daughter-in-law to pamper her. This festival is also having its significance and customs which have to be followed with care. If your mother-in-law is lives with you or not, you always remember her on this day and always buy thoughtful and meaningful gifts for her. This is a custom and ritual at the end of the day daughter-in-law has to give her some gifts to her mothers-in-law.

Origin of the Karwa Chauth 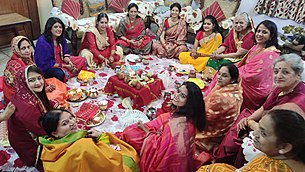 Basically, Karwa Chauth was celebrated to honor the bond and the friendships between two women of the same house- one is a newlywed woman who came after the marriage and the other woman who belongs to the in-law’s family. They share a strong bond and the concept of celebrating karwa chauth is very interesting and sweet. In the ancient time when there are no phones and anything through which we can communicate with our parents that a newly married woman finds any problem then there is no source through which she can communicate, most of the time with a young woman face problem she will be left alone no one is there with whom she shares and talk their thoughts. To overcome this problem new married women make a friend in their in-law’s house which is called kangan saheli. The new friend stays all the time will women. In there, all ups and down and also they share strong bond just like sisters. And the Karwa Chauth was celebrated to honor their dedication to their beautiful relationship. But nowadays the concept of the karwa Chauth festival is totally lost somewhere and now the concept of karwa Chauth festival is totally changed, now married women do fasting for their husband for their long life. Some of the ancient stories are behind our celebration:

In ancient times there was a beautiful queen named Veervati who was the only sister of seven loving and caring brothers. Once on the occasion Karwa Chauth, she was at their parent’s place and does fasting from sunrise to moonrise. In the evening she was eagerly waiting for the moonrise because she was doing fasting and she was suffering from hunger and thirst. And their brothers will not able to see her suffering. So, they created a mirror in a Pipal tree, which looks similar to the Moon is up in the sky. And they call their sister to break her fast. When the moment Veervati broke her fast, the news came from her husband’s house that his husband is dead. She starts weeping and at that time the Goddess arrived in front and revealed the truth about their brother that she was tricked by her brothers. Now, next year she kept the Karwa Chauth fast with full devotion and after seeing the dedication veeravati, Yama, the lord of death restored life to her husband.

The Story of Satyavan and Savitri

In the history of Karva Chauth, there is also a story of the Satyavan and Savitri. When Lord Yama, came to procure Satyavan’s soul, Savitri begged him to grant him life. When he refused, she began fasting and didnot eat anything for a long period time. When Yamraj came to know about her devotion he gave up and granted her, her husband’s life. From this day onwards, Karva Chauth is celebrated by wedded brides for ensuring long life of their husband.

The Story of Mahabharata

According to Mahabharata, Draupadi, too, is said to have observed Karva Chauth. Once Arjun went to the Nilgiris for penance and the rest of the Pandavas faced many problems in his absence. Draupadi, out of desperation, remembered Lord Krishna and asked for help. Lord Krishna reminded her that on an earlier occasion, when Goddess Parvati had sought Lord Shivas guidance under similar circumstances, she had been advised to observe the fast of Karva Chauth. Draupadi followed the instructions and observed the fast with all its rituals. Consequently, the Pandavas were able to overcome their problems. On this day, fasting women listen to Karva Chauth legends with rapt attention.

The Story of Karva

According to a legend, a woman named Karva was deeply devoted to her husband. One day while bathing in the strem, the husband was attacked by a crocodile. Karva came running and tied the crocodile with a cotton yarn. She then went to Lord Yama, the Lord of the death, and requested him to send the offending crocodile to hell. When Lord Yama refused, she threatened to curse him. Afraid of the power of a devoted wife, Lord Yama readily accepted and sent the crocodile to Yamalok or hell, and blessed Karva’s husband with long life.