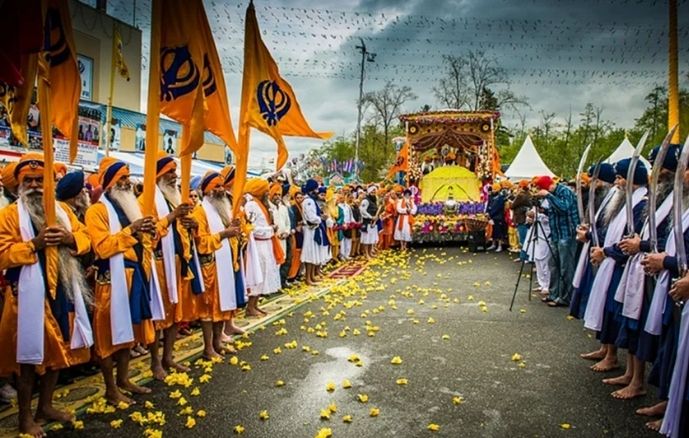 Baisakhi is the harvest festival and it is a Punjabi festival that is celebrated with great pomp and show. It is mainly a Sikh festival celebrated especially in Punjab, Haryana, and western Uttar Pradesh with great zeal and enthusiasm. The celebration for this festival involved families, society, food, music, and dance. All the Punjabis across the world celebrate this festival.

This is the Sikh New Year’s day and it is the foundation day of the Khalsa Panth of warriors, which is formatted by Guru Gobind Singh in I699.

On this day people dip into the holy water and go to gurdwaras for prayers and their people have guru ka langar. Also, they wear traditional dress to celebrate the festival. Also, people go to the Nagar kirtan to watch the parade and they do some charity, distribute sweets, and do Seva also.

Nagar Kirtan is the Sikh parade of Guru Granth Sahib. In this, the holy Sikh book will be carried. This religious parade is carried by the devotees and during the parade, all devotees chant and sing holy hymns. The procession is led by the Panj Pyare. Panj pyare are the five beloved ones who are the central part of the Khalsa. Panj pyare will be dressed in saffron. They are followed by the holy book of the Sikhs, Guru Granth Sahib, and other members of the procession. Also, all the sewadars or volunteers help in the parade. They clear all the roads before which the procession is to pass because in this parade panj pyare are barefoot. So to protect them and give clear roads to their guru all people clean the roads and shower water and flowers on the roads. The procession finishes at the designated Gurudwara where ardas or the prayer is offered and after the parade langar will be distributed.

This day is not only important for Sikh people but also this is important for non-Sikh people. They also go to the holy place and seek the blessing of God.  And a number of people on this day take a dip in a river or lake and then visit a temple. It is a day when people make and share sweets, chocolates, and beautiful gifts with their loved ones. Also, celebrate the day festival while dancing and singing traditional songs.

Baisakhi is celebrated on the Northern side and in Bengal and Assam people celebrate the Bihu festival.

There is one incident that is related to the Baisakhi festival. In 1919 on this day British colonial officer General Dyer opened fire on thousands of Indians at Jallianwala Bagh in Amritsar. The death of thousands of people at the festival shocked the world and from that day the fight for independence from the foreign rule began with full spirit and it will come to an end in 1947.